The Actuator Disc and Blockage Model add-on in WindSim 11 Provides You a Remarkable Method for Simulating Speed Reduction in Both Upstream and Downstream.

The presence of wind turbines can influence the wind field in several ways. The application of analytical wake models in the post process is one attempt to partially account for the wind field-turbine interactions that are not covered by the CFD calculation. A more fundamental approach is to involve the turbines into the CFD calculation beforehand so that wind field-turbine interactions can be included in the solution procedure. This approach is realized by WindSim’s Actuator Disc (AD) Model, where a turbine is represented in terms of a two-dimensional disc applying thrust forces to the wind field. 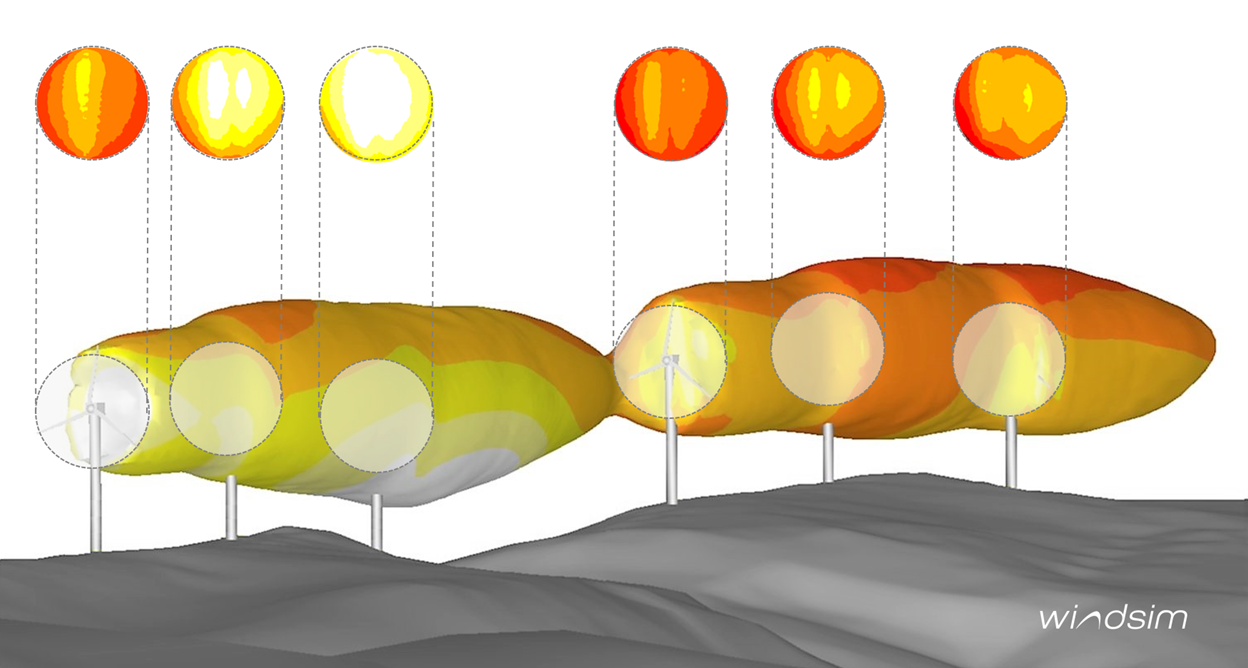 The turbulent kinetic energy is shown as an iso-surface where the colour indicates the 2D wind speed, a cross-section is depicted above representing the actuator disc area.

In the Disc Area, the resistance to the wind field modeled by these thrust forces is dynamically included in the CFD calculation. Therefore the turbine is modeled as a “real obstacle” in the wind field and resulting effects as wake effects and other wind field-turbine interactions are intrinsically contained in the CFD solution. 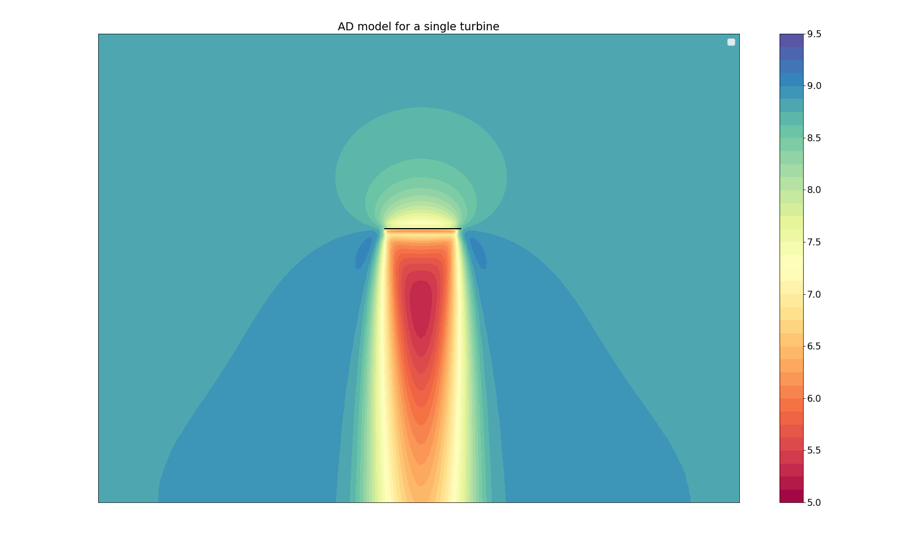 Shown is an AD model calculation for a single turbine. The resulting two dimensional wind speed (m/s) at hub height for a CFD simulation with one AD at intermediate incoming wind speed is represented.

The AD model can be easily activated in the Terrain module with a corresponding objects file (.ows), WindSim then automatically include actuator discs at the turbine locations for all further calculations. After a velocity-dependent inclusion of the blockage effect, the outcome is summarized in the Energy module.

The actuator disc as well as the influence of the blockage effect have been tested for a lot of demo cases in order to connect the underlying technique with the variety of models and application possibilities provided by WindSim. The implemented windfarm blocking was not only tested systematically against these test cases but also against real wind farm data. Here it turned out that the implemented procedure is even suitable to reproduce rather small effects.

b. All Directions Enabled

Since the Actuator Disc is represented as a staircase in the orthogonal grid for non-orthogonal wind directions the numerical conditions for different wind directions are not precisely the same. In the actuator disc implementation of WindSim 11 the applied thrust forces, therefore, follow a new weighting scheme in order to improve directional independence.

CFD calculations clearly show the impact of the presence of a turbine in the wind field. This impact can not only be detected downstream but also upstream where a reduction of the wind speed in front of the turbine is the resulting effect. For more than one turbine this effect can become collective and appear as blocking of the whole windfarm area. This loss of wind speed is not available for energy production and consequently leads to the same rate of loss in annual energy production (AEP) that can typically range between 0% and 5%. To avoid a systematic overprediction of the AEP the consideration of the blockage effect is required.

In contrast, a speed-up region lateral to the turbine position and especially in between turbines can lead to an increase in wind speeds. This effect is naturally contained in the AD model as well and can even be included in the blockage effect calculation of WindSim (see the manual for more information). To include this effect into the wind resource assessment, WindSim provides a Blockage Model which is based on the described AD implementation.

The figure shows the absolute value of the two dimensional wind speed at hub height for a CFD calculation on flat Terrain. On the left hand side no turbines in terms of AD’s are included, on the right hand side a very dense windfarm with 6×6 turbines is modeled with the AD. Except for the wake effects, the reduced wind speed bubble in front of the turbines as well as an area of speed up lateral to the windfarm, can be observed. These effects can be simply explained by the imagination of a windfarm as a blocked area as shown by the sketch in the upper right corner.

The basis of the blockage effect calculation within WindSim is given by the comparison between a calculation with and without AD. With the implemented calculation procedure it is still possible to run all common features of WindSim in connection with a Blockage Effect estimation. After a velocity dependent inclusion of the blockage effect, the outcome is summarized on the level of the Wind Resources and the Energy module in WindSim 11.

Here WindSim provides the estimation of wake losses by the AD model as well as via all analytical wake models available in WindSim. Apart from the specification of wake and blockage losses WindSim 11 provides the bias of an wakes-only approach which ensures full model control. For more information we refer to the description of the Add-on module available in the WindSim software.

© 2021 WindSim
Terms of Use
Privacy Policy
Copyright
We use cookies on our website to give you the most relevant experience by remembering your preferences and repeat visits. By clicking “Accept All”, you consent to the use of ALL the cookies. These are the cookies used on our sites:
Google Analytics: We use Google Analytics for gathering statistics on how our website is being used, so that we may improve it.
HubSpot: Collects and analyzes data related to site usage and performance.
However, you may visit "Cookie Settings" to provide a controlled consent.
For more information, please see our Privacy Policy.
Cookie SettingsAccept All
Manage consent

This website uses cookies to improve your experience while you navigate through the website. Out of these, the cookies that are categorized as necessary are stored on your browser as they are essential for the working of basic functionalities of the website. We also use third-party cookies that help us analyze and understand how you use this website. These cookies will be stored in your browser only with your consent. You also have the option to opt-out of these cookies. But opting out of some of these cookies may affect your browsing experience.
Necessary Always Enabled
Necessary cookies are absolutely essential for the website to function properly. These cookies ensure basic functionalities and security features of the website, anonymously.
Functional
Functional cookies help to perform certain functionalities like sharing the content of the website on social media platforms, collect feedbacks, and other third-party features.
Performance
Performance cookies are used to understand and analyze the key performance indexes of the website which helps in delivering a better user experience for the visitors.
Analytics
Analytical cookies are used to understand how visitors interact with the website. These cookies help provide information on metrics the number of visitors, bounce rate, traffic source, etc.
Advertisement
Advertisement cookies are used to provide visitors with relevant ads and marketing campaigns. These cookies track visitors across websites and collect information to provide customized ads.
Others
Other uncategorized cookies are those that are being analyzed and have not been classified into a category as yet.
SAVE & ACCEPT

Join us for FREE to get instant email updates.

You can unsubscribe at any time by clicking the link in the footer of our emails. For information about our privacy practices, please visit our website.